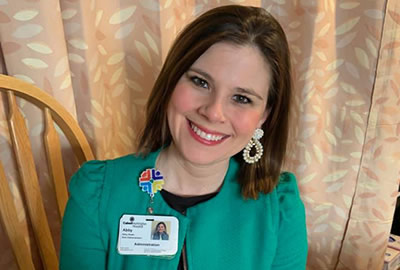 Working with the CEO and senior leadership, Reale will lead MHN’s policies and objectives for government and local community relations, as well as monitor federal, state and local legislation that could impact hospital operations.

Reale received her master’s degree in healthcare administration from Marshall University and her bachelor’s degree in political science and international relations from West Virginia University. She is active with a number of community organizations, including Unlimited Future, Inc., PROACT, Fairfield Development Corporation, Junior League of Huntington and Generation Huntington. Reale is also a member of the American College of Healthcare Executives. Earlier this year, she received a Generation Next 40 Under 40 award from The State Journal for her contributions to her community.

For the past two years, Reale has worked as the assistant administrator at Cabell Huntington Hospital (CHH). Prior to CHH, she served as finance director for both the West Virginia Governor and Attorney General 2016 election campaigns. Reale was also the president and CEO of the Associated Builders and Contractors West Virginia and an account executive/lobbyist for Minardi Public Affairs.

“As a native of Cabell County, this area and the people who live here mean a great deal to me,” Reale said. “I am excited to begin this new role as we work together with our government officials and our community to further Mountain Health’s Mission to improve the health and well-being of our region.”